Sweeteners are tricky on keto. Carb-dense sweeteners, even “natural” ones like honey, are pretty much out because…well, “carb-dense” really says it all. But 0-carb/0-calorie sweeteners aren’t necessarily perfect choices – some have fillers that can add to the carb counts, while others can cause digestive problems, and there’s a huge open question about how they affect the gut biome.

For beginners, here’s a quick overview of four different categories of sweeteners:

If that sounds like a lot of names and categories to keep track of, don’t sweat it. We’re cutting through the confusion with a quick list of must-knows:

Before you start worrying about what sweetener to use, are you sure it’s even going to be a problem?

Quite a few studies, l indicate that even modest carb restriction can reduce carb/sugar cravings after a few weeks.

It’s true that some people do still enjoy sweeteners even on keto. If that’s you, and if you can find one that doesn’t compromise your health or other goals, there’s no reason to deprive yourself of something you enjoy. But you might be surprised by what happens when you give your body a chance to re-set its own taste preferences – the “need” for sweeteners suddenly becomes a lot less pressing.

Assuming you do want a sweetener, don’t fall for the “natural = keto = good” trap.

Natural, yes. Keto, not so much. 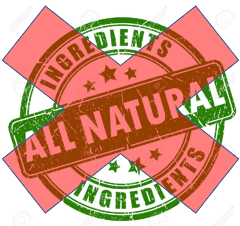 “Natural” is not a synonym for “keto-friendly.” A lot of “natural” sweeteners have way too many carbs for keto (“natural” in scare quotes because there’s no real agreed-on definition, so at this point, the word is basically a meaningless marketing term anyway). Take a look at some comparative carb counts, per teaspoon (data from the USDA nutrition database):

In other words, most “natural” sweeteners have at least as many carbs per teaspoon as ordinary table sugar. None of these are keto-friendly in large quantities, regardless of how “natural” they might be. 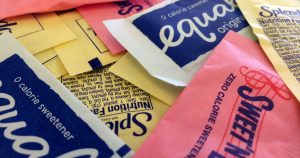 What Exactly Should I Stay Away From?

Given that refined sugar is entirely composed of carbs, you’ll need to avoid it if you’re following Keto.

Avoiding natural sugars leaves you with a range of artificial sweeteners but these pose various other potential health issues.

So, make sure to avoid these artificial sweeteners on Keto:

These are often found in diet drinks and sugar-free candy and gum. You can also find packets of these in stores posing as zero-calorie sweeteners.

Many Keto-diets avoid the artificial sweeteners but instead turn to low-calorie sugar alcohols instead because they are often considered to be more natural.

However, sugar alcohols can cause a lot of digestive problems since they pass into your large intestines without being properly absorbed.

There’s a more direct problem for you if you overload on artificial sweeteners, though…

Going overboard on these sugar alcohols could lower your ketone levels.

Here are the main culprits you should consider cutting out of your diet:

What alternatives can I use? 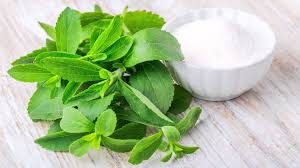 Instead of using artificial sweeteners, go with stevia if you need a sweet kick. Stevia is extracted from a leafy green plant, and you’ll find it as a white powder or mixed in liquids. Stevia is considered very safe and may even help lower blood pressure in hypertensive patients and lower blood sugar levels in diabetics. 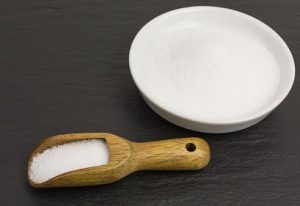 Erythritol has almost no calories, causes minimal digestive disruption, and is ideal for baked goods. Just make sure to not eat too much of erythritol as many people still find it causes a slight laxative effect. 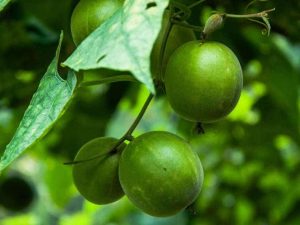 Monk fruit, also known as Luo Han Guo or longevity fruit, is a fruit native to China and northern Thailand. It’s 300 times sweeter than sugar and has been used in traditional Chinese medicine to treat obesity and diabetes. It’s as sweet as stevia but without the bitter aftertaste of most stevia products.

As with all products, you have to be careful what ingredients they contain. Although pure monk fruit is claimed to have no calories and carbs, most products contain other sweeteners like inulin, which contains a few calories. 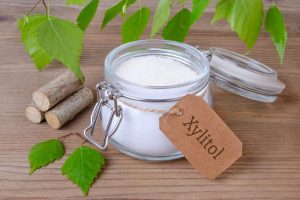 Xylitol is a sugar alcohol that naturally occurs in the fibers of certain fruits and vegetables. It’s a sugar substitute that tastes like sugar but has fewer calories.

Like Stevia, it doesn’t contain many nutrients but has some other benefits for dental health and may prevent osteoporosis. It’s also used in cosmetics and medicines. Xylitol should be used moderately as a sweetener. Although the human body gets adapted after several weeks of consumption, this study shows that doses over 65 grams can cause diarrhea. Note that “high doses” for some people may be as low as 40-50 grams per day.

Xylitol has a GI of 13 and has 3 calories per gram. It does not affect blood sugar significantly if consumed in moderation. It is 1 to 1.3 times sweeter than sugar, so you can use the same or less than sugar.

Also, be aware Xylitol can be toxic for dogs, so keep it safe out of their reach! I personally don’t use Xylitol, as I experienced minor insulin spikes and digestive problems. 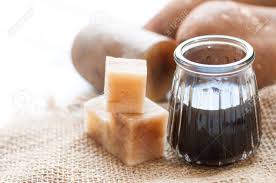 Yacon syrup is a sugar substitute extracted from yacon plant from its tuberous roots grown in South America, Andes. The root has been used for its nutritional and medical purposes for hundreds of years. Like to maple syrup, it’s made via natural evaporation. It has a slightly caramel taste and is similar to blackstrap molasses and coconut palm sugar.

Yacon syrup has been known for its anti-diabetic properties. It consists of 50% of fructooligosaccharides (FOS) and a fiber called inulin which does not increase blood sugar. FOS are also extracted from fruits and vegetables such as bananas, onions, chicory root, garlic, asparagus, jicama and leeks.

Yacon syrup is also high in antioxidants and potassium which is an essential micronutrient, when dealing with the symptoms of “Keto-flu”. However, the root consists of primarily free fructose at about 35%, so you should consume this sweetener with caution (see this table at the bottom of this post).

Yacon syrup has other health benefits thanks to its significant antioxidant properties and keeping the kidneys and gut healthy. A study has shown that a daily intake of yacon syrup resulted in a significant decrease in body weight, waist circumference and body mass index when given to obese pre-menopausal women.

When it comes to side effects, excessive consumption of yacon syrup can lead to stomach discomfort. This is due to the fiber content and you should not use more than a few teaspoons a day.

Also, you should not use yacon syrup for baking, as the structure of FOS breaks down at high temperatures (over 120 °C/ 248 °F). 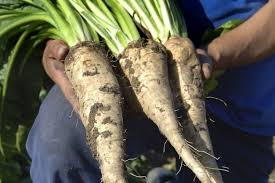 Chicory root inulin (chicory root fiber) is probably the most popular inulin-based sweetener. A product based on chicory inulin, commercially known as Just Like Sugar, additionally contains vitamin C, calcium and orange peel. Although the packaging claims there are almost no calories and no carbs, this isn’t exactly true. Studies show that the human body can absorb 150 kcal / 100 grams of inulin on average which means there are some carbs from which we derive calories.

Apart from chicory root, there are other natural sources of inulin such as Jerusalem artichoke, banana, garlic, jicama, onion or yacon. You may find products made from these foods – just make sure you avoid unnecessary additives and additional sweeteners.

Unlike sugar alcohols, inulin-based sweeteners don’t have any cooling effect and shouldn’t cause digestive problems if the recommended amount is not exceeded. Studies show that inulin has a beneficial effect on blood sugar and it one of the best sugar alternatives for diabetics and those on a low-carb diet. The nutritional values of chicory inulin are about 150 kcal and 37 g net carbs per 100g / 3.5 oz.

Unlike chicory root, which is not recommended for women who are pregnant or breastfeeding, chicory inulin is generally recognized as being safe (GRAS). Inulin has shown to have prebiotic effects beneficial for our health. One of the inulin-type prebiotics are called fructooligosaccharides (FOS). It’s a type of carbohydrate which our body cannot fully digest. Consumption of FOS does not increase blood sugar.

Ideally, you should not use sweeteners containing FOS for baking, as the structure of FOS breaks down at high temperatures (over 120 °C/ 248 °F).

When it comes to side effects, inulin has shown to not only feed the good bacteria, but also bad bacteria. This may lead to gas formation and digestive issues. Studies have shown that a daily dose up to 20 grams is well tolerated.

Tagatose is a sugar substitute, a monosaccharide naturally occurring in dairy products, fruits and cacao. Since 2001, tagatose has been generally recognized as safe (GRAS).

The taste is very similar to table sugar and Erythritol. It has a very mild cooling effect – it’s 92% as sweet and contains only 38% calories of sugar (< 1.5 kcal / g). It has no unpleasant aftertaste and browns and caramelizes just like sugar… Somebody said low-carb crème brûlée? 🙂

Tagatose only has a small effect on blood sugar and insulin levels therefore is recommended for low-carb diets. It has a glycemic index of 3 which is very low. It also inhibits digestive enzymes and degradation of carbohydrates in the small intestine which results in inhibition of carbohydrate absorption in the body – that’s why the amount of available carbohydrates (net carbs) is quite low (see this table at the bottom of this post).

Among other benefits linked to consuming tagatose are increased HDL cholesterol (reduced risk of heart attack), prebiotic effect (feeding healthy bacteria in your gut) and antioxidant effect. Tagatose has been indicated to be a potential treatment for anemia, hemophilia, infertility and it doesn’t promote tooth decay. It’s beneficial for treating type 2 diabetes and obesity. 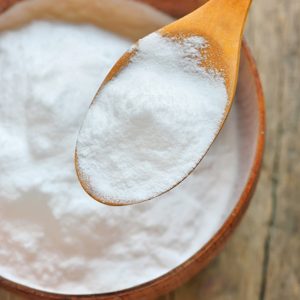 Mannitol does not affect blood sugar but has more calories compared to Erythritol – about 1.5 calories per gram.

Recent research shows that Mannitol may be a potential treatment for Parkinson’s disease. As for the side effects, Mannitol is not recommended for people with anuria and congestive heart failure.

Mannitol is soluble at higher temperatures and great for candy coating but I haven’t tried it. 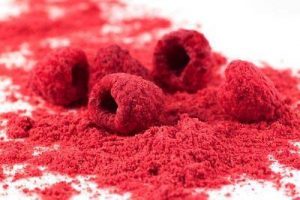 Berries are generally known to be the most nutritious and lowest in net carbs from all fruits. If you can find freeze-dried berries and berry powders with no additives, try them in smoothies, yogurt, and baked goods.

Fruit powders add a lot of flavors and you will only need to use a very small amount, so you don’t have to worry about excessive carbs.

The net carbs content of freeze-dried fruit varies from 30 to 70 grams per 100 grams (raspberries contain less, while blueberries more carbs). 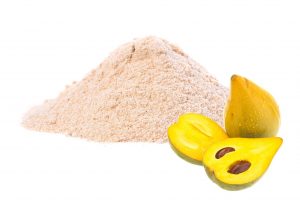 It’s mildly sweet and you can use the powder to sweeten up smoothies or baked goods.

Although it’s great for flavoring, don’t expect lucuma powder to add a lot of sweetness. 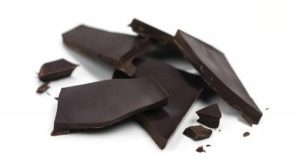 Dark chocolate can be added to your breakfast “cereal”, baked goods or yogurt.

When looking for high-quality dark chocolate with the least amount of net carbs, opt for products with over 75% cacao. I personally don’t mind a small amount of added sugar but avoid products containing certain sugar alcohols which raise blood sugar (sorbitol, maltitol, etc.) which tend to be added in large quantities. If you can, find products free of unnecessary additives. Small amounts of soy lecithin are acceptable unless you suffer from soy allergies.

Yes, it’s pretty clear, we’re not a fan of sweeteners. While some sweeteners may be better than others, the best strategy for achieving optimal health and weight loss may be learning to enjoy real foods in their unsweetened state. Join our group here 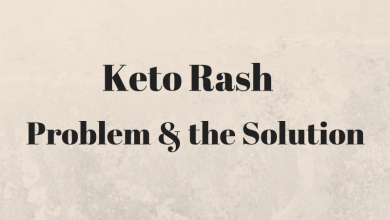 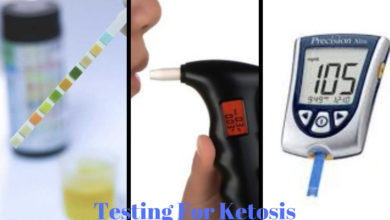